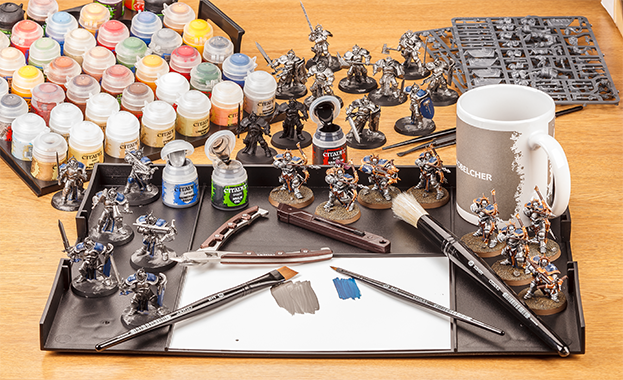 Do you play Warhammer, Guildball, Warmachine, or any other miniatures game and love painting and modelling? Well, we have the event for you.

There will be two main categories- Best Single Piece and Best Army (Warhammer 40,000)

Miniatures may be submitted for Best Single Piece from con opening on Saturday at 9pm for consideration. Entry is free.

Any miniatures entered will be displayed under supervision in the main hall of the convention for the duration of Saturday. Miniatures must be available to be viewed for the entire day (until around six-seven pm, when the final slot begins), and as such miniatures taking part in tournaments cannot be submitted- If your mini isn’t there, people can’t vote for it! The miniatures will be judged by a vote of attendees present throughout the day.

The Winner will be announced before the pub quiz on Saturday night of the convention in Kennedy’s Station on Westland Row as part of the Saturday night 40th Anniversary festivities. Prize support is being provided by our wonderful friends at Kromlech, makers of fine resin bases, miniatures, bits and terrain!

The Best Army award will be assessed as part of the Warhammer 40,000 tournament by a vote of all competitors so as not to detract from the running of the tournament itself, and announced at the conclusion of the tournament along with the overall winner on Sunday!